Suppose the worst has happened and you have been involved in an accident.  Through no fault of your own, another driver has failed to yield right of way and collided with the front passenger side of your vehicle.  Your respective vehicles are still able to drive away (after exchanging insurance information, of course).

Now you’re left with the headache of getting those dings and dents fixed, right?  It’s such an eyesore to have a dented door and fender.  Wrong.  While it seems like a no-brainer to make sure the body looks good, even simple fender-benders can result in catastrophic mechanical problems if left undiagnosed/untreated. 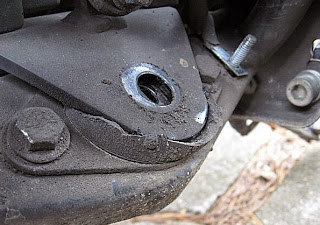 In the aforementioned scenario, the engine compartment may have been compromised with the jolt from the side.  Not only is the body obviously damaged, there are any number of other smaller problems that could become HUGE problems.

For instance, a motor mount could have been broken during impact.  If left in a state of disrepair, a broken motor mount could create a plethora of problems.  Excessive vibration while idling, dangerous engine movement while operating (the engine will literally try to lift up out of the engine compartment when you step on the gas), broken belts and hoses, and even engine damage!

In addition to something like simple motor mounts, one could be looking at frame damage, suspension damage, broken struts, bent tire rods, etc.  While you may be able to drive a while with some or all of these issues, continual driving on such mechanical problems will put your entire car at risk of catastrophic failure.  It’s things like this drivers need to be aware of if/when they happen to be involved in an accident.  Body work is certainly something to worry about when it comes to car repair, but mechanical repair is the golden ticket to keeping your vehicle going.

If you’ve been involved in even a minor fender-bender, please bring your vehicle down to one of our Rob’s Automotive centers to diagnose any unseen issues with your car as soon as possible.  We are equipped to handle any repair under the hood, as well as performing the body work to make your car drive like new AND look like new.